Needle Felting Tutorials on the Internet

Halloween House and House of Worship

I almost thought I would abandon this little baby blog for a number of reasons.  After some thoughts, I've decided to keep it because I know I will continue to make crafts and follow other miniaturists' posts from time to time whenever I can make time.

Of course, my recent shopping impulses have again made me stockpile a lot of craft materials that include polymer clay, air dry clay, and wool roving that are all sitting idly under the desk and all over the place.  Regardless, I managed to finish two mini houses. 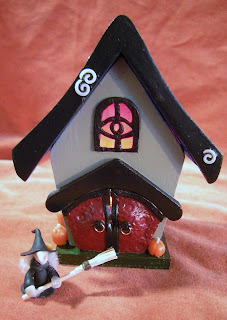 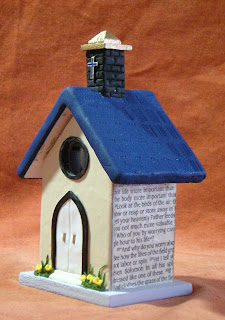 My wish is to be able to finish a needle felted canine that is at the moment quite skeletal and baldy...
Posted by Petite Wonders at 2:12 PM 5 comments:

After two unproductive and lethargic weeks, I finally decided to put my hands on a couple of craft projects again.

I placed an express order for some flesh tone Cernit clay and sculpted this long-haired doll in kimono. Strictly speaking, she is not a genuine kimono doll because her kimono is simply a robe that may have a remote resemblance to an unlined one.  I'll settle for the style of simplicity for now.;-)

Originally, I planned to make a petite doll of the orient to complement the lovely chair I got as a giveaway gift from Bear Cabin Minatures. As a result of miscalculation and my fledgling skill as a miniaturist, the doll turns out to be close to 6" tall.  She looks humongous to stand next to the chair, let alone sitting on it. Oops! 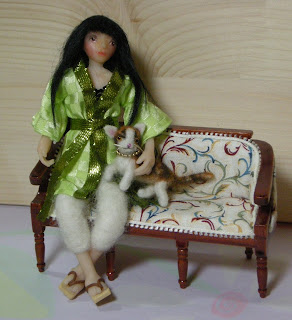 Currently, I have a language exchange partner in Japan.  Yes, I'm learning Japanese! I took the opportunity to get her comments on the doll.  She asked if this is a female. Being quite honest and forthcoming, she said her facial features are feminine, her figure looks like a male.  LOL! Anyway, I've just listed both the doll and the kitty cat on eBay.

Cernit clay is a challenge to me because it is very sensitive to heat from my hand or fingers. Once baked, the skin tone looks more translucent than even Prosculpt.  I love it despite the difficulty of handling.  Certainly, I'll experiment more with it later.
Posted by Petite Wonders at 10:06 PM 4 comments:

Though a craft junkie, I had not heard of AIM till a month ago when I began to follow other artisans' blogs.  This is such an interesting read because I'm the kind of crafter who has a wide spectrum of interests from minis to knitting, sewing, woodworking, you name it.  In any case, AIM has already become my number 1 favorite online magazine.

So, on a quiet Saturday morning, I flipped through the pages in this new issue one after another, treating myself with all kinds of wondrous minis, along with a cup of joe in hand.  Then, oolala, on page 102-103, Blog of the Month features Bear Cabin Minature's blog by Julia and Hywel (Mel?).  Hey, congrats!

Now, I will go back and finish the rest of the magazine.  Have a great weekend!
Posted by Petite Wonders at 10:28 AM 2 comments:

My craft world is getting smaller?

Earlier this week, I got the most pleasant surprise because I was the lucky giveaway winner to receive Julia's beautiful Japanese willow upholstered chair.  When it arrives, I'm going to place it next to my computer monitor so that I can look at it often.  I'm sure such beauty is going to inspire me continuously on my future craft projects.  Thanks so much, Julia, for the generous giveaway!

While waiting for my muse chair to arrive, I simply felt lethargic to craft or do anything.  Does summer heat do this to "normal" people as well?  Eventually, I sculpted two quickie miniatures that are now being auctioned on eBay.  They are the giveaway kind of auctions at 99 cents each and perhaps a couple of pennies will be gained in the end if they are sold.

The new clay sculptures are much smaller than those that I used to make.  I thought to myself, well, I'm going from mini to micro.  It seems that my world is getting smaller and smaller without downing the "DRINK ME". 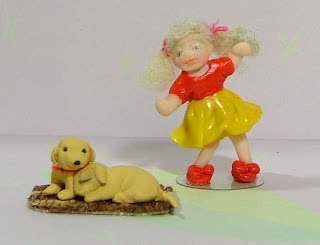 I got one other surprise this week.  It showed up in my mail box in the form of a hand-written note.  It was from a lady who bought my two-faced witch.  She was very sweet to mail me that note of appreciation because her computer had recently bitten the dust.  I hope the mishap has nothing to do with the two facer witch. ;-)

Posted by Petite Wonders at 10:33 PM No comments:

My original plan for the week to felt a teeny kitty and to fool around with epoxy resin got scrapped.  Among ALL other things done instead, I completed my application to become a freelance writer for Demand Studios.  My application was pre-approved because I had written several short "how-to" pieces for eHow a few months back and the latter was acquired by Demand Studios (DS) in April.  To continue to write "how-tos", I need to sign up with DS.


DS and eHow are both internet content aggregators that offer online public platforms for "netizens" who love to write and make a few extra dollars.  I've to add, they are also referred to by some as "content mills".  While eHow didn't pay writers directly (but offered ad revenue sharing based on some undisclosed algorithms relating to page traffic and such), DS in general pays writers a fixed flat fee for each article published.  The median rate is around $15 a piece.


I write about DS here because I thought of your great writing skill, your wit and passion for writing that I see in your blogs!  Since DS also accepts freelance writers from Canada and UK, perhaps when you have a bit extra time after blogging, you can write a piece or two for DS too. :-)  Just a thought!


Anyway, today I went through way too many forum posts from former, current, and potential DS freelancers.  On top of that, I got distracted and began to read posts from a forum on PublishAmerica.  Oh dear, my eyes really hurt!  I've got to go now...

No more witches for a while...

I sculpted two really scary looking witches in the past two weeks and felt relieved that both are sold!  I posted the first one in this blog earlier and here's the second witch: 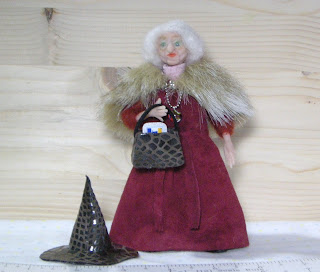 It'll be a while before I make any further attempts at witches.  I'm afraid of receiving their misdirected spells and should stay away from churning out Frankenstein's creatures.

This week, I finished a polymer clay fish pond and needle felted a calico cat.  I enjoy both so I'd like to share them with you here.  Kitty is now being auctioned on eBay at http://cgi.ebay.com/ws/eBayISAPI.dll?ViewItem&item=150451536329&ssPageName=STRK:MESELX:IT 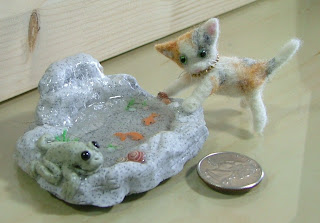 I was also very pleased having won an auction for a dollhouse dining room chair last Friday on eBay.  Once the chair arrived, I immediately and hastily replaced the original fabric with gingham.  Of course, I couldn't wait to use it as a prop in the kitty auction.  The chair is a bargain at $0.99 plus very reasonable shipping charge. 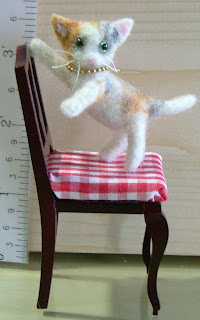 My goal for the next week is to felt a tiny cat with b/w coat and experiment with epoxy resin to make glass-like animal eyes.  I do anticipate both fun and frustration though. :-)
Posted by Petite Wonders at 8:29 PM 6 comments:

Since eBay started the 100 free listings per month as long as the item is less than $1, I really find it difficult to find anything to sell through it.  I refer to not just my handcrafts but also the stuff that I want to rid of from around the house.

Last week, I auctioned some overstocked black eye beads for 99 cents.  The responses were amazing with a total of 6 bidders.  Final price became $3.32 plus shipping.  I can't quite understand what it is that propels the same bidders to engage in the competition to win.  I once tried to bid on a double pack of clear stamps starting at $0.99 and then determined not to be outbid.  I ended up paying about 3 bucks as the highest bidder.  Though $3 is really a drop in the bucket, the craziness that made me rapidly increase my bids during the last 3 minutes of auction was unexplainable...

I just listed a needle felted kitty at a sale price on eBay for a 3-day auction and temporarily took it off from Etsy to take advantage of the free listing regardless of starting price till June 1.  I'll busy myself to find all the "unwanted" stuff to sell on eBay between now and next Tuesday, as a clean house effort. :-)
Posted by Petite Wonders at 11:54 AM 2 comments:

Petite Wonders
My name is Louise. I'm a craft enthusiast. My favorite media are polymer clay and roving wool. I also enjoy eco-friendly crafts that utilize, recycle and repurpose unwanted materials whenever possible.